Everyone knows about Nanyang Jade! Nanyang jade is Dushan jade. It is one of the famous Chinese jade. Today, Xiaobian will introduce Nanyang Jade for everyone. If you want to know about Nanyang Yu's friends, just check it out!

Dushan jade is produced in Dushan, Nanyang, Henan Province. It is also called â€œNanyangyuâ€ or â€œHenan Yuâ€, also referred to as â€œJiyuâ€. Dushan is the nearest provincial forest park, national mine park and tourist scenic spot in Nanyang City, producing the only famous jade of China. 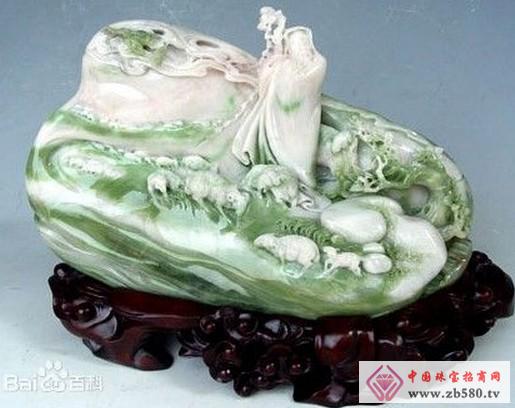 According to the local jade research report of the Asian Gem Society (GIG): Nanyang jade is produced in Dushan, 8 km north of Nanyang City, Henan Province. It is different from jadeite and nephrite which consists of only one mineral element. It is an "alteration gabbro" containing a variety of mineral elements, mainly calcium aluminum silicate. Nanyang jade has a hardness of 6---6.5 and a specific gravity of 3.29. Its hardness is comparable to that of jade. Therefore, foreign geologists call it "Nanyang Jade." The historical status of Nanyangyu has not received much attention in the past. In fact, its mining time was quite early, and it was adopted as early as the late Neolithic period. A Nanyu shovel unearthed from the loess of Nanyang County was identified as a product of the late Neolithic period. The seven jade articles in the jade carvings unearthed from the Yin Ruins are all Nanyang jade.

Dushan Jade is famous for its main production in Nanyang Dushan. Dushan is located in the northeast of Nanyang City. Dushan jade is tough and delicate, delicate and soft, with variegated and lustrous color. There are six kinds of pigments of green, blue, yellow, purple, red and white. 77 color types are important jade materials for arts and crafts carvings and become Nanyang. Famous specialty is one of the four famous jade in China. Dushan jade carving has a long history and archaeological projections. As early as 5,000 years ago, the ancestors had already known and used Dushan jade. In the old China, Nanyang jade carving has formed a large industry, and there are more than 80 workshops in the city.

Dushan jade has been explored for thousands of years, and it is full of caves in the mountains. In ancient times, the jade pits were mostly vertical and generally shallow. Using blasting technology and rock drills, mining vehicles and other equipment, the tunnel has reached hundreds of meters deep in the mountains, and the branches of the spider web are criss-crossed and complicated.