Clothing orders will be popular with cold singles orders 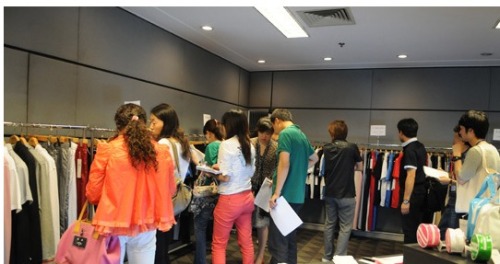 At the moment, various clothing brands have begun preparations for the spring and summer 2014 trade fairs. After experiencing the backlog of inventory, profit decline, and slowing orders in 2012, the difficulty of the apparel brand has not yet been resolved. The annual ordering conference not only relates to the sales performance of apparel companies, the speed of capital withdrawal, the influence of brand image and brand penetration, but also determines the future fate of brand enterprises. In the context of the downturn in the industry, brands are thinking about ways to deal with it.

At the Spring/Summer 2014 trade fair held at the end of July 2014 at Peak, a dealer at the scene told the â€œChina Businessâ€ reporter that due to serious inventory, many dealers were not present, making the ordering event not as lively as usual, and most of them were on the scene. , but also come to see what some new products, taking into account some of the new goods, with new products to stimulate digestion of inventory.

At present, although many clothing brands have intentionally or unintentionally avoided the performance of the fair, they cannot cover up the fact that the order will be cold. A series of sports brand 2013 annual fair data show that in 2013 sports brand order orders are still in a decline channel, such as Xtep fourth quarter orders fell 15% to 17%, the annual average decline of about 15% ~ 20%; 361Â° decreased by 23% in spring and summer, decreased by 19% in autumn and 17% in winter. The average annual decline was about 20%; Peak decreased by 18.5% in the second quarter, and then suspended the announcement of the results of the order; Li Ning also from the first In the second quarter, the sales of the trade fair will cease.

In this context, clothing brands are thinking about ways to deal with it. For example, some companies started trial single store ordering mode, that is, the store's goods are determined by the store manager himself. The store manager will calculate the amount of product to be purchased through the sales data, store display, and geographical location of his store. Style, and then to the company's orders, changed the traditional model of goods from the brand leader to the traditional model. This reporter learned that: Anta, noble birds and other companies are deep in the third and fourth tier cities based on the strengthening of the single-shopping order model, trying to data analysis through the ordering data to a single shop, with a personalized ordering model to avoid high inventory crisis .

The change from wholesale to retail In fact, "single store ordering" is not a fresh move. This reporter learned that, in order to strengthen the terminal management of franchisee shops, ANTA has adopted single store orders in 2012. In the country's more than 8,000 stores, 40% of them are opened by distributors themselves, and 60% are opened by franchisees.

Zhang Yu, head of the Anta brand of the Trustworthy Building Mall in Zhangzhou, Hebei Province, told reporters that even the Anta executives admit that the original sports brand's development model was to advertise first, to make brand influence, and then to push the goods to wholesalers, and wholesalers Whether the company can sell all the products, the brand will not care, so each season will cause some more or less inventory, after many years of accumulation, now the sports brand's inventory problems concentrated outbreak, the brands realized that the need to adjust and Change its development model.

Li Li (a pseudonym) of the Guanzi Store of Beijing Guiren Bird Co., Ltd. revealed that at the 2013 autumn and winter ordering meeting, the elegant bird also began a trial single store ordering model, and this will also be included in this year's brand development plan. The goods in the next store will be decided by the manager himself. The manager will obtain the quantity and style of the product to be purchased through the sales data, store display and geographical location of his store, and then place an order with the company.

From the pressure of pressing down to give the owner the freedom to order, it can be considered that the brand began to consider the needs of the channel and the market. Hou Lidong, who once served as the brand director of Peak Sports, believes that single-shop ordering is the beginning of brand retail transformation. Behind it is the issue of the companyâ€™s focus on the life cycle of products from production to sale, from the original branding focus to the current brand retailing. The transformation.

The success of the single store order model still faces many challenges. But in a sense, the single-shopping order model has become a way for garment companies to solve high inventory. Urban Beauty Industrial Co., Ltd. (hereinafter referred to as â€œurban beautyâ€) Zhang Guijuan, the manager of the 932 branch of the Beijing Direct One District of North China Branch, pointed to an underwear in the store and told reporters: â€œChina has a vast territory, and there is a difference in aesthetic requirements between the north and the south. There is also a significant difference in the market demand for underwear and underwear, such as this underwear, which sells particularly well in the north, but it is not very good in the south, including differences in the consumption levels of the different stores, and so on. The situation of one store can not be unified, so the single store ordering model can reasonably purchase goods according to local conditions and effectively curb the backlog of inventory."

Zhang Guijuan, who has been a manager for two years, said, â€œWhen I was promoted as a manager, my storeâ€™s single store ordering model had been in operation for a while, so when ordering, I could refer to previous sales data to determine Whether or not a product is re-ordered, how much is ordered, and the company has been organizing training, including product awareness and market grasp."

Wudan Di, the owner of the urban beauty franchise store, told reporters that the urban beauty will hold two large-scale ordering meetings each year, one is the autumn and winter product ordering meeting in April, and the other is the spring and summer product ordering session in the following year in September. Managers, shopkeepers and supervisors from all over the country went to the conference and ordered according to their actual needs. The company also gave orders. The reporter found on the urban beauty online ordering system that the system is like a Taobao platform. The top can display the product's style, fabric, model and inventory, and the owner can place orders according to his own needs. Wu Dandi said: â€œA lot of new and celebrity models are often late if they order lately. Therefore, after a lot of new products come up, the company will first distribute, that is, according to the volume and sales of each store, a part of them will go to the store. These are often best-sellers and are sold out soon."

Chu Qingqi, a light industry researcher with a flat channel for downsizing inventory investment advisers, told reporters that there are two main reasons for the prevailing operating mode of single store orders. First, the single-store order model can control inventory more accurately and avoid a large gap between the amount of orders and the actual market demand. In addition, the single store order skips the dealership and can further reduce the cost of clothing sales.

Zhu Qingye believes that the original brand of clothing used is the ** ordering mode, which is to direct the wholesale operation to wholesale products to dealers, and then sold by dealers to single stores. Dealers are the "protagonists" of the order meeting, but they often order according to personal experience, which will lead to a large gap between the number of orders and the actual market demand, resulting in high inventory or out of stock situation. The single-store ordering model directly skips the dealership, and the stores can directly place orders with companies, which will reduce the role of dealers in the sales process.

â€œAt this stage, high inventory levels are serious enough to cover the operating conditions of most clothing brands. If the single-store order model is adopted, the pressure on the company's inventory can be relieved to a certain extent. This is a good correction for the large orders at the current ordering meeting.â€ Zhu Qingtao said that because the single store order model is a direct choice for retail store managers, the order quantity is based on terminal data. In this way, brand owners will have a more accurate grasp of the terminal, thus reducing the inventory of channels caused by blind orders.

For how to better use the single-shopping order model, City Beauty's vice president and chief information officer Sha Shuang said: "The single-shopping order model is conducive to reducing inventory risks and returning store funds as soon as possible, but there are also some problems, such as scientific and reasonable orders. Requires experienced managers and replenishment, and grass-roots supervision with comprehensive management capabilities, all of which pose a great challenge to front-line talent demand, that is, whether there is a qualified and knowledgeable manager and supervisor. Regional managers will directly influence the sales performance of this store or even this area. The managerial performance of different store managers in the same location may even be twice as big or even more.

â€œThe companyâ€™s single-store ordering model has been running for many years and is still being perfected and supplemented each year. In 2013, it will also pilot new online replenishment systems.â€ Zhang Guijuan revealed to reporters. After the new system goes online, the system will automatically calculate the data based on the volume of passengers and the composition of passengers in the past, and provide replenishment lists on a regular basis; at the same time, the system will give the store certain autonomy, and the manager can make special considerations, such as commercial circles. The environment, old customers' spending habits, etc., supplement other products on the list. The use of the new IT system can not only realize the function of ordering and replenishment of new goods, but also can focus on the existing stock situation.

Sha Shuang gave an example to illustrate the effectiveness of overall regulation and smart replenishment. If there are three stores A, B, C, where A, B are franchise stores, C is a self-operated shop, the company's actual storage is 250. The demand for A, B, and C stores is 100, 50, and 100, respectively, and the total market demand is also 250; the order quantity exceeds expectations by convention, and the three companies are 120, 60, and 120 in order; the actual shipment volume is due to franchise. The store reminder was more positive, followed by 120, 60, and 70 pieces. The actual sales volume was 100, 50, and 70 pieces. In the end, only 220 pieces were sold, and 30 pieces were accumulated in the franchise storeroom. The inventory was 12% of the turnover. Assume that each A, B franchise stores brings profits of 10 yuan to the company, 20 yuan for self-operated stores, and ships and sells products according to the traditional model. The final total profit is 3,200 yuan, and the model with no inventory at the end of actual demand is a single store. Order sales, profit of 3500 yuan.

â€œThe ordering platform for future franchise stores is actually a B2B e-commerce platform. The urban beauty will provide franchisees with a flexible experience similar to Taobao shopping, including services such as inquiries, similar recommendations, and historical sales records. The list will be used by franchisees. Provide replenishment advice based on data analysis. If you get goods according to the list and the franchisee makes money, then it will follow the system's replenishment mechanism.â€ Sand Shuang told reporters.